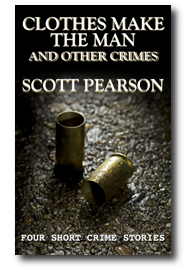 Clothes Make the Man and Other Crimes is my latest e-book, a collection of four crime stories. In “The Sun Dress,” a dress, an affair, and a gun lead to a surprising and explosive confrontation. Officer Peggy Roberts makes a traffic stop and hopes to catch a killer in “Clothes Make the Man.” The flash fiction “Details, Details” illuminates the research behind David’s perfect plan to kill his boss. Finally, “First Impression” is a night on the town with a cold-blooded assassin who has made going unnoticed the cornerstone of his profession.

The lead character of “Clothes Make the Man,” police officer Peggy Roberts, had a cameo in my second Kate Sullivan mystery story, “Of Murder and Minidonuts.” Roberts will return in the third Kate Sullivan story when I get around to writing it.

“Clothes Make the Man” was my contribution to Writes of Spring, an anthology edited by Gary Schulze and his wife Pat Frovarp, the then-owners of the fabulous Once Upon a Crime Mystery Bookstore in Minneapolis.

For more than a decade they provided unwavering support for mystery writers in general and Twin Cities writers in particular. Even though for years I had but one mystery short story to my credit—my first Kate Sullivan story, “Out of the Jacuzzi, Into the Sauna,” in Resort to Murder—they always invited me to participate in their annual Writes of Spring signing event. They provided my second mystery credit when they included “Clothes Make the Man” in Writes of Spring, which celebrated the tenth anniversary of the Writes of Spring and the twenty-fifth anniversary of the bookstore.

So I was particularly saddened to learn that Gary had passed away just as I was preparing to release Clothes Make the Man and Other Crimes. A big thanks to both Gary and Pat for everything they have done for the mystery community of writers and readers. It was well deserved when they won a Raven Award from the Mystery Writers of America in 2011.

I’d also like to give a shout-out to Jeff Ayers, Kevin Lauderdale, and Michael Allan Mallory, whose insightful comments helped put an extra polish on each of the stories in Clothes Make the Man and Other Crimes.

Scott Pearson was first published in 1987. In the decades since, he has published humor, mystery, urban fantasy, science fiction, horror, poetry, and nonfiction. He lives in personable St. Paul, Minnesota, with his wife, Sandra, and daughter, Ella (when she’s home from college). Please visit his website, www.scott-pearson.com. View all posts by Scott Pearson